Proceeds from Featured Giants Players' Pizzas Being Donated to Organization 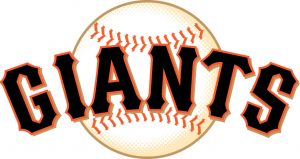 13-time World Pizza Champion Tony Gemignani and San Francisco Giants stars Brandon Belt, Alex Wood and Logan Webb will come together for the sixth annual launch of players’ seasonal pizzas, available for a limited time, in support of George Mark Children’s House and is adding a new location for fans to visit in support of the organization this year, at www.slicehousebelmont.com

$1 from each players’ custom slice and $6 from each full pie sold will be donated to the organization, to support their work offering life-affirming care and comfort for children and their families. 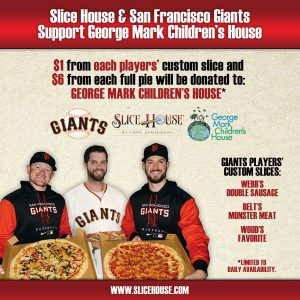 ABOUT TONY’S COAL FIRED PIZZA & SLICE HOUSE: Tony’s Coal Fired Pizza and Slice House pays homage to New York and New Haven style pies. One of the only pizzerias of its kind on the West Coast, customers can find authentic New Haven and Connecticut style pizza cooked in a genuine coal fired oven. The coal fired pizza is a 16″ pie with a medium thickness that runs evenly from the middle all the way out to the crust. In addition to the coal fire, customers can find classic New York style pizza by the slice. Just like in New York the pizza is 20″ and cut into 8 large slices—enjoy a little slice of the east coast in SF’s North Beach.

ABOUT SLICE HOUSE BY TONY GEMIGNANI HAIGHT STREET: Slice House by Tony Gemignani, on Haight Street is located at 1535 Haight Street, San Francisco, CA 94117, in the Haight-Ashbury neighborhood and offers several pizzas by the slice artfully made with artisan flours, an array of authentic sauces, and seasonal ingredients.

ABOUT SLICE HOUSE BY TONY GEMIGNANI BELMONT:  www.slicehousebelmont.com is located at 1000 El Camino Real C in Belmont, CA and offers Tony’s world famous New York, Sicilian, Grandma, Detroit, and California style pizzas along with seasonal salads, his famous meatballs all available through carry out or delivery.

ABOUT GEORGE MARK CHILDREN’S HOUSE: George Mark Children’s House (GMCH), located in San Leandro, California, provides life affirming care for children with illnesses that modern healthcare cannot yet cure, or for those who have chronic medical conditions. GMCH bridges the gap between hospital and home, offering safe, excellent medical care in the comfort and warmth of a home-like setting for patients who do not need the resources of a full children’s hospital. GMCH offers five types of service: Transitional Care for children who have usually been in an acute care hospital setting and still need medical care, but not of an acute nature, before they transition to being cared for at home;  End-of-Life Care, where a patient’s family can stay in its own family suite and surround their child with the love and the support; Respite Care, where patients receive high quality medical care and appropriate activities while offering parents and families a short break from the nonstop care at home; Perinatal Care provides expertise, resources, support and information for at-risk preterm births about prognosis and prospective complications, establishing continuity of care for infants and parents; and Bereavement Care to provide ongoing support of families following the death of their child.

ABOUT THE SAN FRANCISCO GIANTS: One of the oldest teams in Major League Baseball, the 137-year old franchise moved to San Francisco from New York in 1958.  After playing a total of 42 years in Seals Stadium and Candlestick Park, the team moved to the privately constructed, downtown ballpark on the corner of 3rd and King.  2022 marks the Giants 23rd season at Oracle Park.  The organization is widely recognized for its innovative business practices and baseball excellence.  In 2010, the franchise was named the Sports Organization of the Year by Street & Smith’s Sports Business Journal and in 2012 was named Organization of the Year by Baseball America.  Oracle Park is also the only ballpark in the country to have earned Silver, Gold and Platinum LEED certification for an existing building.

Since opening its gates, Oracle Park has become internationally-renowned as a premier venue in the world of both sports and entertainment.  On the diamond, more than 65 million spectators have witnessed a number of magical moments, including a franchise record 107-win season in 2021, three World Series Championships (2010, 2012 & 2014), the raising of four National League Pennants and eight playoff appearances.  On June 13, 2012, the organization’s first-ever Perfect Game was thrown by Giants ace Matt Cain.  On July 10, 2007, San Francisco was the center of the baseball universe when it hosted the 78th Major League Baseball All-Star Game.  The ballpark has played host to some of music’s biggest acts, including Lady Gaga, Beyoncé & Jay Z, Ed Sheeran, the Rolling Stones, the Eagles, Bruce Springsteen and the E-Street Band, Green Day and Billy Joel.  It also was the site of the 2018 Rugby World Cup Sevens.

Off the field, the Giants Community Fund uses baseball and softball, through its award- winning Junior Giants Program, to promote health, education and character development to propel youth in underserved regions to be positive forces in their communities.  The Fund, a 501(c)(3) public charity, is managed by a volunteer Board of Directors and sustained by contributions from individuals, businesses and foundations through a number of special partnerships and fundraisers. Since its inception in 1991, the Fund has donated over $34.5 million to community efforts.

We have lots going on for George Mark families and the public. Please "like" us on Facebook to see the ongoing activity with George Mark and the wonderful organizations who generously support us.